Biden: Run for President May Not Be “Feasible” 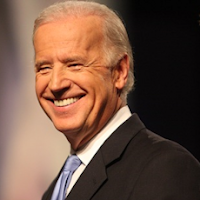 In an exclusive interview with Father Matt Malone, S.J., editor in chief of America, Vice President Joseph R. Biden, Jr. discusses his thoughts on Pope Francis, as well as his Catholic faith, his upbringing, his public life and private sorrow, and his thinking about a possible presidential campaign.

Although Biden stresses he hasn’t yet made a decision, he acknowledges he “may not get there in time to make it feasible.”


"It's just not there yet and it may not get there in time to make it feasible to be able to run and succeed, because there are certain windows that will close," Biden said. "But if that's it, that's it. It's not like I can rush it."

With the first Democratic presidential debate just a few weeks away, Biden is clearly aware his window of opportunity is closing. It’s not clear what he sees as the deadline, though he could be thinking of the October 13th debate in particular or the pressures of organizing to file to have his name placed on prime ballots in 50 states, plus DC and U.S. territories. Those filing windows start in early November and begin to close in early December.

Joe Biden is polling at around twenty percent among Democratic presidential candidates, despite not being a declared candidate, meaning he has some built in support. Nationally, Biden polls behind Hillary Clinton by roughly a two-to-one margin, and he is even with or trails Bernie Sanders, depending on the poll.  But Biden seems to be a person at peace with the idea the end of his political career serving in elected office may have arrived -- as Biden said, “If that’s it, that’s it.”

The America Media interview was conducted on September 17, 2015 in Washington, D.C. The following video highlights parts of Father Malone's interview with Biden. The full half-hour video can be viewed at here.